Finally, the JIT post :-). First some background: Despite our plans at the end of the EU period, PyPy's Python interpreter didn't get a good and widely applicable JIT in the last year. The reason for that was that we discovered that although the basic idea to generate JIT compilers is good, the concrete prototype made during the EU period is basically flawed. It could have been pushed a bit farther, but would have run into deep troubles eventually. One of the problems would have been performance instability: change a seemingly unrelated bit in your source program, and the performance changes in unexpected ways, which is clearly not desirable. Another problem with that old approach is that too much assembler code is generated, leading to memory problems, and also that the generated assembler is bad in various ways, e.g. it is hard in that approach to do proper register allocation.

Therefore we decided that it would be worthless to pursue this direction much further. Instead we tried to research approaches to fixing the inherent problems. This research was largely done in Prolog and I eventually wrote my Master's thesis about it. From the Prolog work we got some good insights into what needs to be done and what sorts of techniques are needed. Also, it inspired Armin to do some more exploration on a small Python prototype which used the lessons learned from Prolog and also some additional ideas from tracing JITs. So far, however, the prototype is neither in RPython, nor much integrated with PyPy.

This research is not the only thing happening in the JIT-area. During the last year, Antonio Cuni was working on bringing the JIT to pypy-cli. This consisted mostly of writing a .NET backend for the old JIT-generator. Some further work is being done since August by John Witulski, who is writing an AMD64 backend for the JIT-generator for his Bachelor's thesis.

Where to go from there¶ 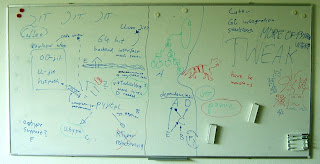 During the sprint we discussed in which directions we should continue now. We plan to work quite a bit on the JIT in the coming months. Both Armin and Anto are in Düsseldorf for four months, and them and me plan to mostly work on the JIT (as well as giving a lecture on "Dynamic Programming Languages", trying to ensnare some more students).

The first step will be to experiment a bit more with Armin's prototype. So far it looks rather promising, but there are some unsolved issues that we need to look into first. The first issue is to think a bit about how to efficiently do profiling to compile only important code paths. The other large issue are so-called "virtualizables". Roughly speaking, they are the frame objects of the interpreter from which the JIT is generated. They need special treatment, because on the one hand it is important that they get optimized away to make the code fast, since the frames are accessed all the time for the local variables; on the other hand they should still be usable for introspection if code is around that is trying to look into them.

When this is done, the prototype needs to be ported to RPython, which is a non-trivial task, since it is rather dynamic so far (it is rather important that the unresolved issues are done before the porting, because once the prototype is in RPython, experimentation will be harder). The porting has the potential to be tedious, but in a sense it is "just work", as opposed to unclear research.

At this point it will become important to think about the backend interface. The interface that the old frontend used to produce assembler code won't be usable for the new approach, so things need to be rearranged slightly. Afterwards the backends will have more information and be invoked at a slightly higher level, which should allow them to produce better code.

When all this is done, the JIT generator will be in a rather good state and it should become possible (modulo a lot of details, of course), to use it on the Python interpreter.

I am intentionally not attaching any time estimates to this blog post. So far our time estimates have not been very accurate when it comes to the JIT, which only lead to disappointment when the JIT failed to materialize. We hope that we will progress in interesting ways in the next four months, but who knows. Note that we are really quite disappointed ourselves that it took so much longer than we planned and hoped. The reason for this is mostly that this work really is research and sometimes it is just hard to predict what sort of problems turn up. Partial evaluation (the basis for our JIT generator) is a 30 years old technique that was always just promising and never really successful, so the fact that we think we can solve its problems in a few years is very much hubris anyway :-). On the positive side, we think that we now know these problems much better than ever before and that we have a plan that has a chance to succeed.

Also we are still convinced that our approach has huge potential, despite the difficulties. If we manage to pull it off, it should be significantly simpler to support new language features in the JIT and also to get speedups on some rather interesting bits of the language. Some ideas we are having include generating a JIT for the regex engine or speed up ctypes-bindings to be nearly as fast as an extension module (or faster?). Also the JIT will be such that by construction the JIT-generated code behaves identical to the original code, which isn't always true for Psyco, for example.

Thank you very much for this post Carl! I have a couple of questions:
You said you were experimenting with some ideas from tracing JITs. I wonder how much the new javascript VMs are influencing your work in pypy. Were these techniques considered from the beginning or this is just because of the latest success of tracemonkey? And if so, are there ideas from Chrome's v8 or Squirellfish than could be applied too?
Do they change in any way your expectations regarding the potential of pypy concerning speed?

I quess you will now the work done about hybrid frames in VisualWorks works, but since you mentioned the problem, anyone else could benefit from the following link:

@luis: we definitely read same papers (by Michael Franz and others) as tracemonkey authors. Work on tracing jit for pypy is older than release of tracemonkey (it's even older than first work on tracemonkey). Regarding chrome's v8 it seems the main optimization is implementation of hidden classes, which we kind of get for free combining jit and our existing optimization called shared dict.

From the sound of it, it sounds like it would be useful to have a 64-bit version of Psyco, otherwise there is no stopgap in the meantime...

When will PyPy match Psyco's speed?

Yes, especially on Linux, everything is moving to 64-bit. If there's no 64-bit Psyco, you can't get the benefits of 64-bit Python (memory) and use Psyco at the same time.