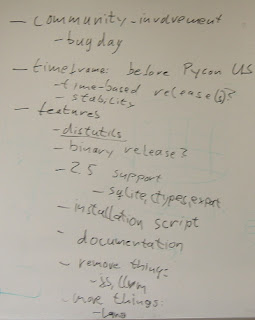 One of the discussions that happened during the sprint was about how to approach the next PyPy release. There hasn't been a release since the end of the EU period, which is not an optimal situation. Therefore we plan to make a 1.1 release at the beginning of next year, ideally before Pycon US. We'd also like to move towards time-based releases. This will be greatly helped by the new buildbot infrastructure, which allows us to decide when the state of the codebase is stable enough to release.

Another goal of the release is to involve more people from the wider PyPy community by having bugdays and generally asking for more support. This will be particularly useful for bugs on platforms that no one of the core developers group is using.

Feature-wise the release will mostly contain CPython 2.5 language support, including some new extension modules (like ctypes, expat, sqlite). In addition we plan to make it easier to actually install and use the PyPy Python interpreter, which means some sort of proper installation procedure and supporting distutils on top of PyPy. Another part of the release will be support for fully sand-boxing an interpreter.

Additionally there were also a large number of improvements on several levels since the last release, like optimizations, faster oldstyle-classes, better GCs, correct finalization behaviour, lots and lots of bugfixes, better threading support (still with the GIL), some work on improving memory behaviour, ...

In contrast to our last release, we will focus mainly on PyPy's Python Intepreter and more particularly its C-version. There are also various experimental interpreters that PyPy contains, like for Prolog, Smalltalk, JavaScript and Scheme. We also don't intend to put the LLVM and Javascipt backends in the release, since they are essentially unmaintained and at least partially broken. If anybody is particularly interested in one of these components, please feel free to step up and take responsibility for them. Another thing that the release won't contain is a JIT. I plan to make another blog-post about this soon, stay tuned.

Looking forward to news on the JIT.