This years installment of the yearly PyPy Düsseldorf Sprint is drawing to a close. As usual, we worked in the seminar room of the programming language group at the University of Düsseldorf. The sprint was different from previous ones in that we had fewer people than usual and many actually live in Düsseldorf all the time.

David spent the sprint working on the arm-backend branch, which is adding an ARM backend to the JIT. With the help of Armin he added support for bridges in the JIT and generally implemented missing operations, mostly for handling integers so far.

Ronny and Anto worked the whole week trying to come up with a scheme for importing PyPy's SVN history into a mercurial repository without loosing too much information. This is a non-trivial task, because PyPy's history is gnarly. We are nearly at revision 79000 and when we started using it, Subversion was at version 0.1. All possible and impossible ways to mangle and mistreat a Subversion repository have been applied to PyPy's repo, so most of the importing tools just give up. Ronny and Anto came up with a new plan and new helper scripts every day, only to then discover another corner case that they hadn't thought of. Now they might actually have a final plan (but they said that every day, so who knows?). 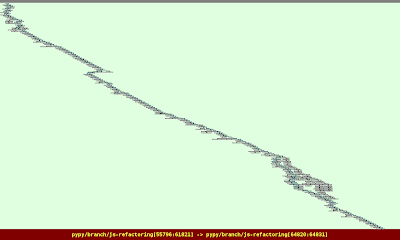 The branch history of PyPy's repository (every box is a branch)

Carl Friedrich and Lukas started working in earnest on memory benchmarks to understand the memory behaviour of Python code better. They have now implemented a generic memory benchmark runner and a simple analysis that walks all objects and collects size information about them. They also added some benchmarks that were proposed in the comments of the recent call for benchmarks. As soon as some results from that work are there, we will post about them.

There were also some minor tasks performed during the sprint. Armin implemented the _bisect module and the dict.popitem method in RPython. Armin and Carl Friedrich made the new memory-saving mapdict implementation more suitable to use without the JIT (blog post should come about that too, at some point). They also made classes with custom metaclasses a lot faster when the JIT is used.

The last three days of the sprint were spent working on Håkan's jit-unroll-loops branch. The branch is meant to move loop invariants out of the loop, using techniques very similar to what is described in the recent post on escape analysis across loop boundaries (see? it will soon stop being science-fiction). Some of the ideas of this approach also come from LuaJIT which also uses very aggressive loop invariant code motion in its optimizers. Moving loop invariants outside of the loop is very useful, because many of the lookups that Python programs do in loops are loop invariants. An example is if you call a function in a loop: The global lookup can often be done only once.

This branch fundamentally changes some of the core assumptions of the JIT, so it is a huge amount of work to make it fit with all the other parts and to adapt all tests. That work is now nearly done, some failing tests remain. The next steps are to fix them and then do additional tests with the translated executable and look at the benchmarks.

It's great to see improvements in pypy. At this moment, the only three benchmarks that perform better in cpython than in pypy are spitfire, slow spitfire and twisted_tcp.

spitfire and slowspitfire are a 'won't fix' benchmarks (at least in the near future). The spitfire_cstringio is using the same thing, but cStringIO instead of a list of strings.

Twisted_tcp is slightly more complex and has something to do with pushing a lot of data through sockets. In pypy you usually have to copy data before write, because it can potentially be moved in the GC.

Thanks! I suppose "won't fix" has a meaning in a pypy context. What does it mean?

won't fix means we won't fix it ;-) To be precise it means we know this program is slow, but also there is a way to write this program to be fast, please use the other way.

So it doesn't make much sense including these benchmarks in speed.pypy.org, don't you think?
Perhaps it should be described somewhere what are the strengths and weaknesses of this implementation, suggesting the right approach for each task. Something like "best practices" or something like that...

I think deleting it from the nightly run doesn't make sense. It still measures something and helps us catch regressions.

The document you're proposing is actually a really neat idea. I've already did a couple of presentation on it, so it's only about gathering knowledge ("only").