We spent the week in the San Francisco Bay Area showing off PyPy. Here are notes and photos of the tour.

Google has offices in downtown San Francisco. They are at a beautiful place and the views are spectacular. We thank Wesley Chun and Guido van Rossum for organizing this meeting. Between 25 and 30 engineers showed up. Some of them were Python programmers, but others were C++ programmers; and they all seem to have real problems that they want to solve with PyPy. We didn't have prepared slides so far, so we mostly ran demos and talked. As predicted, Google would love SWIG support. They suggested that we rename the translation toolchain (as we vaguely thought too) to separate it more from PyPy's Python interpreter; up until today, many had no idea that they could use PyPy for other languages. All in all, it was very positive and people looked forward to meeting up at PyCon. 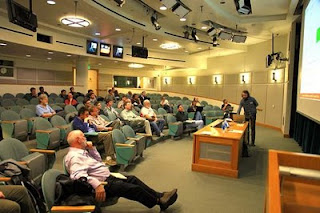 This was the most academically-oriented talk. You can find the abstract, the slides (PgUp/PgDown to navigate) and the video here. There were around 35 people in the audience, and maybe 1000 real-time video watchers (who didn't get to ask questions). The live audience seemed to be a mixture of students, professors, and people from the local industry. We thank David Allison and Andy Freeman for organizing it. It has been two or three years since they invited me (Armin) and I finally managed to get here :-)

The slides are longer than the talk; we focused on the JIT because that was what the audience was most interested in. They were really impressed at the stability, the tests, and that we don't have lots of bugs reported in the JIT of our latest public release. We later found out that many who came to the talk believed that they were going to get a talk about how we jitted a subset of python because real python is too hard -- impossible to do. They came to heckle with examples of how python was impossible. So they were amazed when the first slide of Armin's presentation was "Python is complicated", and the next slide "Python is messy". It was a positive outcome. We made new fans :-) 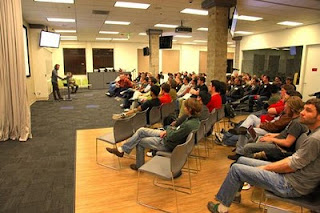 As you can see in the image, tons of people showed up -- ~140. Thanks to Grace Law, who is the coordinator for the SF Python Meet-up, and to Jimmy Retzlaff and Ashley King-Bishof from Yelp. Yelp is also located in downtown San Francisco. This looks like the place to be if you are a start-up in California (and not in Silicon Valley): lots of enthusiastic young people are here, and they are hiring. Yelp has an enormous open space, suitable for huge parties, and the coolest beer dispensers on the planet, made as a hack-a-thon project by three Yelp engineers (pictured below): 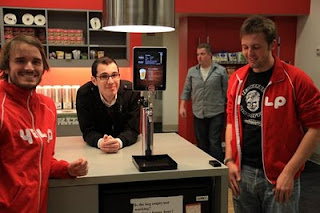 By the way, their management structure seems to be flat. There are almost no line managers, i.e. managers for the engineering staff; instead they self-organize into teams. This is not what you expect for the USA; things appear to have changed a lot.

The talk was in two sections, "PyPy from the user's point of view" and "How the JIT works". Good feedback; impressed that we support all of Python 2.7 (including all the modules that are in C in the stdlib), and impressed that the Python 3.0 conversion is not considered a big deal by us, although we have no precise date yet. The plan is, of course, just to tweak the interpreter until it supports both (by adding the necessary conditions); the other aspects like GC and the JIT will not be affected at all. 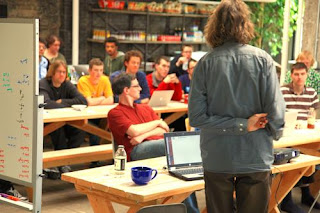 This was another place full of excited, successful young people. The CTO looks like he turned 30 last week, and he's been CTO for 4 years now. The three of us were quite obviously the oldest people there. We felt old. They have another great big open barn complex. It's loud. Very loud. Loud refrigerators, loud street noise, loud machinery in the walls doing who knows what, loudly.

This was the first tech talk at dropbox. Thanks to Rian Hunter for organizing it. They have a big kitchen, and we held the talk in there. There was a skylight, which made the room too bright, so harder to read the slides than would otherwise be the case. They were jazzed about our visit, and wanted copies of all the pictures Jacob took before he left.

They seemed familiar with Google V8, and thought that how long it took to build PyPy was a great incentive for us to make PyPy faster. They are very interested in fast ctypes, fast SWIG, fast Cython. They were pleased and surprised that we don't have too much JIT bloat (typically ~10% of the total RAM usage).

The mobile developers want a smaller Python more than a faster one. Python takes too much memory given the tiny amount available on a lot of cell phones. Not that we have an answer to this problem now.

They were pleased to learn that we will soon be able to JIT ctypes code. And the fact that Armin knows many ways to segfault CPython was a bit of a shock. We talked for an hour after the presentation. Again, a very positive outcome. 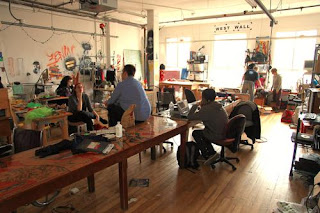 About six people showed up for the sprint. (Late. Californians really do start the day at 11.) Noisebridge is a very eclectic place; people show up to do pretty much everything from sewing to breaking apart equipment to making robots and beer. It's donation-driven. Thanks to Jim Stockford for volunteering the space and arranging this and helping us set up for the sprint.

During the sprint, we did a little bit of everything; there was no clear pattern. Ademan worked on sqlite, Greg Price looked to see if his software could run on PyPy, Will worked on the documentation, and a few of us fixed some more 2.7 tests. Alex Gaynor and Fijal joined us, too.

We gave two talks on the 7th day of our trip so we were already quite exhausted. Fortunately new people joined, so the talks were actually split between multiple people. We would like to thank Peter Norvig and Ben Bayer for inviting us to Google and Andreas Gal, Brendan Eich and Dave Herman for inviting us to Mozilla. Both talks should hopefully appear online at some point soon, but as of now we don't have a link.

It was pretty incredible to find ourselves at Mozilla talking with at least 15 people who deeply understood the ideas of tracing JITs and also understood why we undertook the decision to generate our JIT instead of writing it. They suffered from having to write JavaScript JIT (even multiple ones) by hand, as Armin did with Psyco. He deeply sympathizes. The discussion afterwards was very successful and we're looking forward to cooperating with them. Many exciting things were discussed as possibilities.

Next day we went to Pycon, which is ongoing and a topic for yet another blog post.

thank you for sharing! The tour seems like a very good way to draw the attention of a lot of smart and influential people to the fantastic work you've been doing.

@Luis thanks, fixed I hope. bitbucket is not very good at permalinks and I forgot extradoc has "tip" and not "default"

fijal: bitbucket serves html files as binary or something. This means that at least in Firefox we don't get the "ui" subdirectory, just the raw html. Annoying.

@armin: I think that bitbucket's choice is the only reasonable one, else it could be probably exploited to do some sort of Cross Side Scripting attack

Eh. That means we should host them somewhere else I fear.

The link to the video seems to be broken. At least I can't find the video on the page that is linked to.
Could you please check?
Thanks,
Andy