Skip to main content
I often hear people who are happy because PyPy makes their code 2 times faster or so. Here is a short personal story which shows PyPy can go well beyond that.

DISCLAIMER: this is not a silver bullet or a general recipe: it worked in this particular case, it might not work so well in other cases. But I think it is still an interesting technique. Moreover, the various steps and implementations are showed in the same order as I tried them during the development, so it is a real-life example of how to proceed when optimizing for PyPy.

Some months ago I played a bit with evolutionary algorithms: the ambitious plan was to automatically evolve a logic which could control a (simulated) quadcopter, i.e. a PID controller (spoiler: it doesn't fly).

The idea is to have an initial population of random creatures: at each generation, the ones with the best fitness survive and reproduce with small, random variations.

However, for the scope of this post, the actual task at hand is not so important, so let's jump straight to the code. To drive the quadcopter, a Creature has a run_step method which runs at each delta_t (full code):
run_step is called at 100Hz (in the virtual time frame of the simulation). At each generation, we test 500 creatures for a total of 12 virtual seconds each. So, we have a total of 600,000 executions of run_step at each generation.

At first, I simply tried to run this code on CPython; here is the result:
Which means ~6.15 seconds/generation, excluding the first.

Then I tried with PyPy 5.9:
Ouch! We are ~5.5x slower than CPython. This was kind of expected: numpy is based on cpyext, which is infamously slow. (Actually, we are working on that and on the cpyext-avoid-roundtrip branch we are already faster than CPython, but this will be the subject of another blog post.)

So, let's try to avoid cpyext. The first obvious step is to use numpypy instead of numpy (actually, there is a hack to use just the micronumpy part). Let's see if the speed improves:
So, ~2.7 seconds on average: this is 12x faster than PyPy+numpy, and more than 2x faster than the original CPython. At this point, most people would be happy and go tweeting how PyPy is great.

In general, when talking of CPython vs PyPy, I am rarely satified of a 2x speedup: I know that PyPy can do much better than this, especially if you write code which is specifically optimized for the JIT. For a real-life example, have a look at capnpy benchmarks, in which the PyPy version is ~15x faster than the heavily optimized CPython+Cython version (both have been written by me, and I tried hard to write the fastest code for both implementations).

So, let's try to do better. As usual, the first thing to do is to profile and see where we spend most of the time. Here is the vmprof profile. We spend a lot of time inside the internals of numpypy, and allocating tons of temporary arrays to store the results of the various operations.

Also, let's look at the jit traces and search for the function run: this is loop in which we spend most of the time, and it is composed of 1796 operations. The operations emitted for the line np.dot(...) + self.constant are listed between lines 1217 and 1456. Here is the excerpt which calls np.dot(...); most of the ops are cheap, but at line 1232 we see a call to the RPython function descr_dot; by looking at the implementation we see that it creates a new W_NDimArray to store the result, which means it has to do a malloc(): 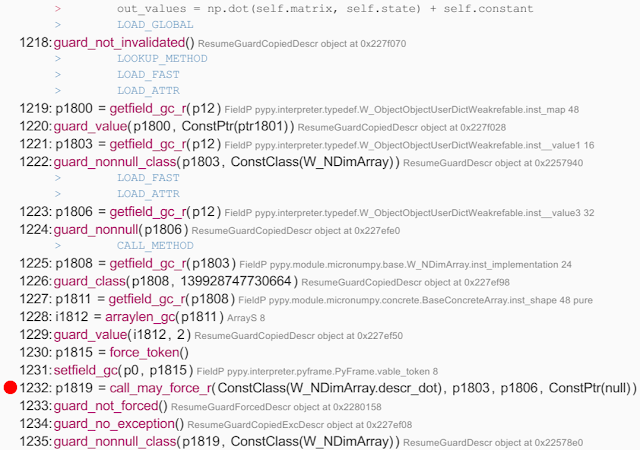 The implementation of the + self.constant part is also interesting: contrary the former, the call to W_NDimArray.descr_add has been inlined by the JIT, so we have a better picture of what's happening; in particular, we can see the call to __0_alloc_with_del____ which allocates the W_NDimArray for the result, and the raw_malloc which allocates the actual array. Then we have a long list of 149 simple operations which set the fields of the resulting array, construct an iterator, and finally do a call_assembler: this is the actual logic to do the addition, which was JITtted indipendently; call_assembler is one of the operations to do JIT-to-JIT calls: 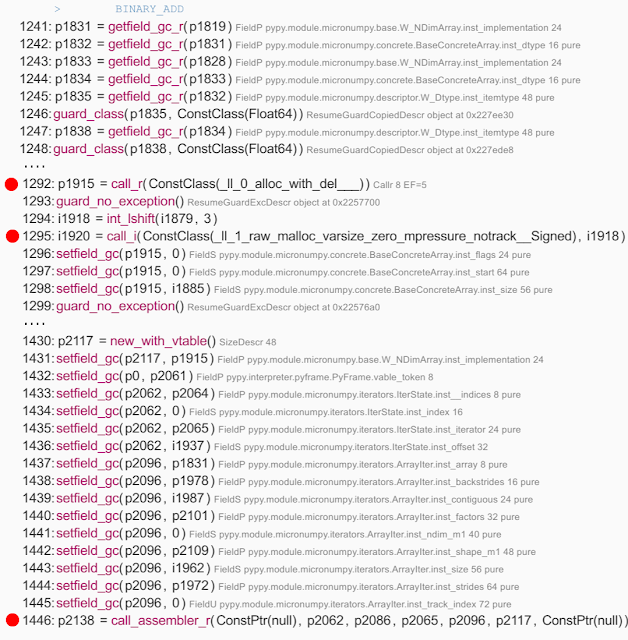 All of this is very suboptimal: in this particular case, we know that the shape of self.matrix is always (3, 2): so, we are doing an incredible amount of work, including calling malloc() twice for the temporary arrays, just to call two functions which ultimately do a total of 6 multiplications and 6 additions. Note also that this is not a fault of the JIT: CPython+numpy has to do the same amount of work, just hidden inside C calls.

One possible solution to this nonsense is a well known compiler optimization: loop unrolling. From the compiler point of view, unrolling the loop is always risky because if the matrix is too big you might end up emitting a huge blob of code, possibly uselss if the shape of the matrices change frequently: this is the main reason why the PyPy JIT does not even try to do it in this case.

However, we know that the matrix is small, and always of the same shape. So, let's unroll the loop manually:
In the actual code there is also a sanity check which asserts that the computed output is the very same as the one returned by Creature.run_step.

Let's look at the trace again: it no longer contains expensive calls, and certainly no more temporary malloc() s. The core of the logic is between lines 386-416, where we can see that it does fast C-level multiplications and additions: float_mul and float_add are translated straight into mulsd and addsd x86 instructions.

As I said before, this is a very particular example, and the techniques described here do not always apply: it is not realistic to expect an 80x speedup on arbitrary code, unfortunately. However, it clearly shows the potential of PyPy when it comes to high-speed computing. And most importantly, it's not a toy benchmark which was designed specifically to have good performance on PyPy: it's a real world example, albeit small.

You might be also interested in the talk I gave at last EuroPython, in which I talk about a similar topic: "The Joy of PyPy JIT: abstractions for free" (abstract, slides and video).

How to reproduce the results¶

Isn't this a factor 80 slowdown because of a design error? Normally, one should store all creatures in a big numpy array and evaluate run_step on all creatures at once.

I don't understand - how do you figure out that line 1232 is not cheap?

@anatoly: line 1232 is a call to descr_dot: if you look at the implementation, you see that it does lots of things including mallocs, and those we know are not cheap at all

Have you tried the third argument of numpy.dot, out to avoid memory alocation?