The following is a guest post by Stefan Troost, he describes the work he did in his bachelor thesis:

In this project we have used the RPython infrastructure to generate an RPython JIT for a less-typical use-case: string pattern matching. The work in this project is based on Parsing Expression Grammars and LPeg, an implementation of PEGs designed to be used in Lua. In this post I will showcase some of the work that went into this project, explain PEGs in general and LPeg in particular, and show some benchmarking results.

Parsing Expression Grammas (PEGs) are a type of formal grammar similar to context-free grammars, with the main difference being that they are unambiguous. This is achieved by redefining the ambiguous choice operator of CFGs (usually noted as |) as an ordered choice operator. In practice this means that if a rule in a PEG presents a choice, a PEG parser should prioritize the leftmost choice. Practical uses include parsing and pattern-searching. In comparison to regular expressions PEGs stand out as being able to be parsed in linear time, being strictly more powerful than REs, as well as being arguably more readable.

LPeg is an implementation of PEGs written in C to be used in the Lua programming language. A crucial detail of this implementation is that it parses high level function calls, translating them to bytecode, and interpreting that bytecode. Therefore, we are able to improve that implementation by replacing LPegs C-interpreter with an RPython JIT. I use a modified version of LPeg to parse PEGs and pass the generated Intermediate Representation, the LPeg bytecode, to my VM.

The LPeg Interpreter executes bytecodes created by parsing a string of commands using the LPeg library. Our JIT supports a subset of the LPeg library, with some of the more advanced or obscure features being left out. Note that this subset is still powerful enough to do things like parse JSON.

As a simple example, the pattern lpeg.P"ab"+lpeg.P"cd" would match either the string ab or the string cd.

To extract semantic information from a pattern, captures are needed. These are the following operations supported for capture creation.

(tables taken from the LPeg documentation)

These patterns are translated into bytecode by LPeg, at which point we are able to pass them into our own VM.

The state of the VM at any point is defined by the following variables:

The execution of bytecode manipulates the values of these variables in order to produce some output. How that works and what that output looks like will be explained now.

For simplicity’s sake I will not go over every individual bytecode, but instead choose some that exemplify the core concepts of the bytecode set.

These bytecodes are the easiest to understand with very little impact on the VM. What it means for a bytecode to fail will be explained when we get to control flow bytecodes.

To get back to the example, the first half of the pattern lpeg.P"ab" could be compiled to the following bytecodes:

Using testchar we can implement the full pattern lpeg.P"ab"+lpeg.P"cd" with bytecode as follows:

The any bytecode is needed because testchar does not consume a character from the input.

A choice point consist of the VM’s current index and capturestack as well as a PC. This is not the VM’s PC at the time of creating the choicepoint, but rather the PC where we should continue trying to find matches when a failure occurs later.

Using choice points we could implement the example lpeg.P"ab" + lpeg.P"cd" in bytecodes in a different way (LPEG uses the simpler way shown above, but for more complex patterns it can’t use the lookahead solution using testchar):

Some patterns require the VM to produce more output than just “the pattern matched” or “the pattern did not match”. Imagine searching a document for an IPv4 address and all your program responded was “I found one”. In order to recieve additional information about our inputstring, captures are used.

In my VM, two types of capture objects are supported, one of them being the position capture. It consists of a single index referencing the point in the inputstring where the object was created.

The other type of capture object is called simplecapture. It consists of an index and a size value, which are used to reference a substring of the inputstring. In addition, simplecaptures have a variable status indicating they are either open or full. If a simplecapture object is open, that means that its size is not yet determined, since the pattern we are capturing is of variable length.

These, and many more bytecodes were implemented in an RPython-interpreter. By adding jit hints, we were able to generate an efficient JIT. We will now take a closer look at some implementations of bytecodes.

The code for the any-bytecode is relatively straight-forward. It either advances the pc and index or sets the VM into the fail state, depending on whether the end of the inputstring has been reached or not.

The char-bytecode also looks as one would expect. If the VM’s string index is out of range or the character comparison fails, the VM is put into the fail state, otherwise the pc and index are advanced by 1. As you can see, the character we’re comparing the current inputstring to is stored in the instruction object (note that this code-example has been simplified for clarity, since the actual implementation includes a jit-optimization that allows the VM to execute multiple successive char-bytecodes at once).

The jmp-bytecode comes with a goto value which is a pc that we want execution to continue at.

As we can see here, the choice-bytecode puts a choice point onto the stack that may be backtracked to if the VM is in the fail-state. This choice point consists of a pc to jump to which is determined by the bytecode. But it also includes the current index and captures values at the time the choice point was created. An ongoing topic of jit optimization is which data structure is best suited to store choice points and return addresses. Besides naive implementations of stacks and single-linked lists, more case-specific structures are also being tested for performance.

In order to find out how much it helps to JIT LPeg patterns we ran a small number of benchmarks. We used an otherwise idle Intel Core i5-2430M CPU with 3072 KiB of cache and 8 GiB of RAM, running with 2.40GHz. The machine was running Ubuntu 14.04 LTS, Lua 5.2.3 and we used GNU grep 2.16 as a point of comparison for one of the benchmarks. The benchmarks were run 100 times in a new process each. We measured the full runtime of the called process, including starting the process.

Now we will take a look at some plots generated by measuring the runtime of different iterations of my JIT compared to lua and using bootstrapping to generate a sampling distribution of mean values. The plots contain a few different variants of pypeg, only the one called "fullops" is important for this blog post, however. 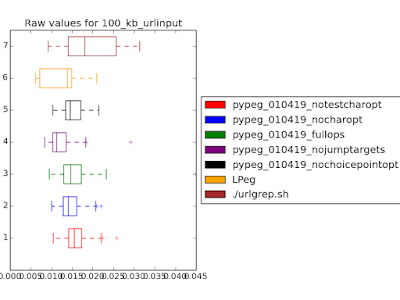 This is the plot for a search pattern that searches a text file for valid URLs. As we can see, if the input file is as small as 100 kb, the benefits of JIT optimizations do not outweigh the time required to generate the machine code. As a result, all of our attempts perform significantly slower than LPeg. 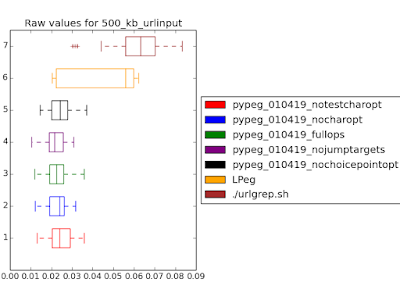 This is the plot for the same search pattern on a larger input file. As we can see, for input files as small as 500 kb our VM already outperforms LPeg’s. An ongoing goal of continued development is to get this lower boundary as small as possible. 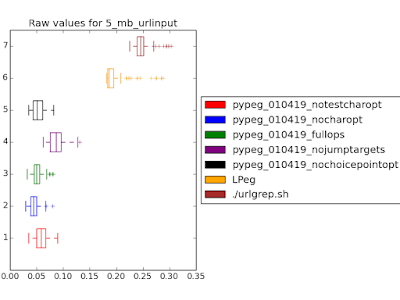 The benefits of a JIT compared to an Interpreter become more and more relevant for larger input files. Searching a file as large as 5 MB makes this fairly obvious and is exactly the behavior we expect. 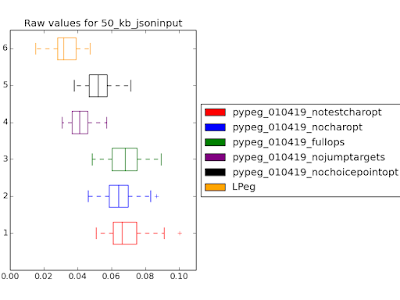 This time we are looking at a different more complicated pattern, one that parses JSON used on a 50 kb input file. As expected, LPeg outperforms us, however, something unexpected happens as we increase the filesize. 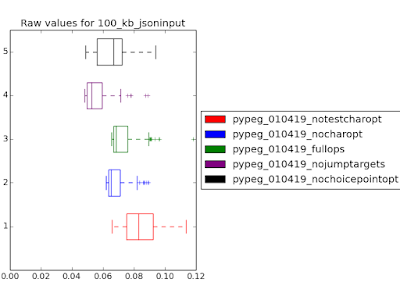 Since LPeg has a defined maximum depth of 400 for the choicepoints and returnaddresses Stack, LPeg by default refuses to parse files as small as 100kb. This raises the question if LPeg was intended to be used for parsing. Until a way to increase LPeg’s maximum stack depth is found, no comparisons to LPeg can be performed at this scale. This has been a low priority in the past but may be addressed in the future.

To conclude, we see that at sufficiently high filesizes, our JIT outperforms the native LPeg-interpreter. This lower boundary is currently as low as 100kb in filesize.

Writing a JIT for PEG’s has proven itself to be a challenge worth pursuing, as the expected benefits of a JIT compared to an Interpreter have been achieved. Future goals include getting LPeg to be able to use parsing patterns on larger files, further increasing the performance of our JIT and comparing it to other well-known programs serving a similar purpose, like grep.

The prototype implementation that I described in this post can be found on Github (it's a bit of a hack in some places, though).