We are pleased to announce the availability of the new PyPy for AArch64. This port brings PyPy's high-performance just-in-time compiler to the AArch64 platform, also known as 64-bit ARM. With the addition of AArch64, PyPy now supports a total of 6 architectures: x86 (32 & 64bit), ARM (32 & 64bit), PPC64, and s390x. The AArch64 work was funded by ARM Holdings Ltd. and Crossbar.io.

PyPy has a good record of boosting the performance of Python programs on the existing platforms. To show how well the new PyPy port performs, we compare the performance of PyPy against CPython on a set of benchmarks. As a point of comparison, we include the results of PyPy on x86_64.

Note, however, that the results presented here were measured on a Graviton A1 machine from AWS, which comes with a very serious word of warning: Graviton A1's are virtual machines, and, as such, they are not suitable for benchmarking. If someone has access to a beefy enough (16G) ARM64 server and is willing to give us access to it, we are happy to redo the benchmarks on a real machine. One major concern is that while a virtual CPU is 1-to-1 with a real CPU, it is not clear to us how CPU caches are shared across virtual CPUs. Also, note that by no means is this benchmark suite representative enough to average the results. Read the numbers individually per benchmark. 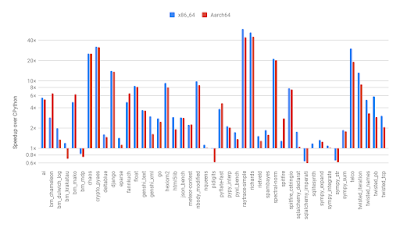 The variance and disparity are likely related to a variety of issues, mostly due to differences in architecture. What is however interesting is that, compared to measurements performed on older ARM boards, the branch predictor on the Graviton A1 machine appears to have improved. As a result, the speedups achieved by PyPy over CPython are smaller than on older ARM boards: sufficiently branchy code, like CPython itself, simply runs a lot faster. Hence, the advantage of the non-branchy code generated by PyPy's just-in-time compiler is smaller.

One takeaway here is that many possible improvements for PyPy have yet to be implemented. This is true for both of the above platforms, but probably more so for AArch64, which comes with a large number of CPU registers. The PyPy backend was written with x86 (the 32-bit variant) in mind, which has a really low number of registers. We think that we can improve in the area of emitting more modern machine code, which may have a higher impact on AArch64 than on x86_64. There is also a number of missing features in the AArch64 backend. These features are currently implemented as expensive function calls instead of inlined native instructions, something we intend to improve.

Hey - I can provide access to several flavors of beefy bare-metal arm64 hardware as part of the Works on Arm project, for your benchmark efforts.

Awesome! Send me an email - fijall at gmail

Yes, it works with any RPython-based interpreter (including pypy2 and pypy3).