At the end of February ten of us gathered in Leysin, Switzerland to work on
a variety of topics including HPy, PyPy Python 3.7 support and the PyPy
migration to Heptapod. 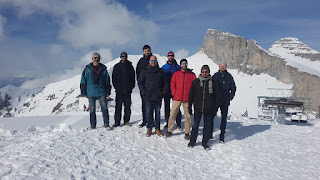 We had a fun and productive week. The snow was beautiful. There was skiing
and lunch at the top of Berneuse, cooking together, some late nights at
the pub next door, some even later nights coding, and of course the
obligatory cheese fondue outing.

There were a few of us participating in a PyPy sprint for the first time
and a few familiar faces who had attended many sprints. Many different
projects were represented including PyPy, HPy, GraalPython,
Heptapod, and rust-cpython. The atmosphere was relaxed and welcoming, so if
you're thinking of attending the next one -- please do!

HPy is a new project to design and implement a better API for extending
Python in C. If you're unfamiliar with it you can read more about it at
HPy.

A lot of attention was devoted to the Big HPy Design Discussion which
took up two full mornings. So much was decided that this will likely
get its own detailed write-up, but bigger topics included:
Quite a few things got worked on too:
And there was some discussion of the next steps of the HPy initiative
including writing documentation, setting up websites and funding, and
possibly organising another HPy gathering later in the year.

Immediately after the sprint large parts of Europe and the world were
hit by the COVID-19 epidemic. It was good to spend time together before
travelling ceased to be a sensible idea and many gatherings were cancelled.

Keep safe out there everyone.

In joke for those who attended the sprint: Please don't replace this blog post
with its Swedish translation (or indeed a translation to any other language :).

How does HPY relate to CFFI?

For example, you can't write a new class in CFFI, and CFFI functions can't receive Python objects as arguments